South Korea is known for having some, er, unusual cuisine. The most popular and delicious foods to native Koreans are sometimes odd and horrifying to the Western tongue. But don’t be afraid, because you might just discover that you love one of those strange side dishes. Read this list of what to try—and what to avoid—before you go.

Kimchi is, most simply, fermented vegetables. It’s a type of food, not a single food. The most commonly-known variety of kimchi is spicy fermented cabbage, which is served with nearly every meal in Korea. Other common varieties include cucumber kimchi (served cold in summer) and radish kimchi (often made into a bitter cold soup in summer), but the possibilities are endless. Before the introduction of the hot pepper by Europeans a few hundred years ago, kimchi was bland. Make sure to try fresh kimchi; aged kimchi is often very bitter. Fermentation makes vegetables extra nutritious, so eat up! 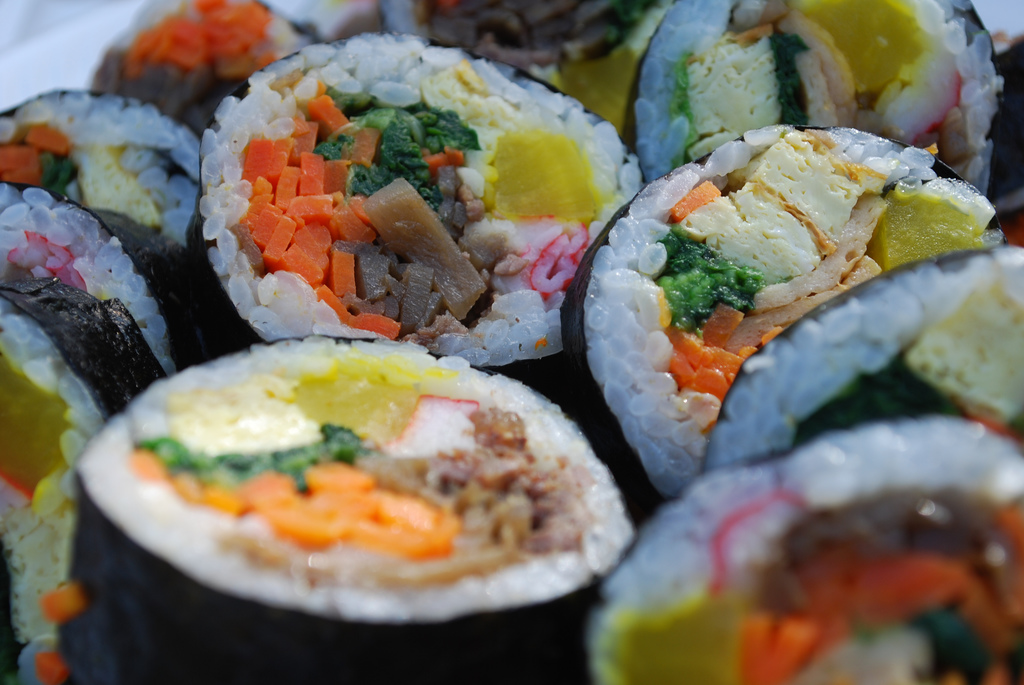 Also romanized as Bondaegi, Bundegi, Beondegi, and so on—it doesn’t matter how it’s spelled, it’s always disgusting. Beondaegi is steamed or boiled silkwarm pupae, usually seasoned and sold from carts on the street. You can also buy them in cans at the grocery store, near the canned tuna. They’re crunchy, smelly, and probably healthy. Many Koreans like it, but just as many think it’s repulsive.

Kimbap is very similar to sushi rolls, with a few key differences. First, kimbap is prepared with regular kim (the Korean word for plain, unsalted seaweed-paper) and sushi is prepared with nori (toasted seaweed-paper). Kimbap rice is plain, while sushi rice is seasoned with vinegar. Finally, sushi is typically served in a round shape, while kimbap is typically round or triangular. Kimbap is cheap, healthy, and can be bought in a variety of flavors for about $1 at any convenience store.

Yes, some Koreans eat dogs. Many Koreans own pet dogs and are horrified by the idea of eating one, and the practice seems most popular among the older generations. These aren’t just random dogs taken off the street, of course; there are dog farms in the country. It is certainly possible to go to a dog farm and select your own dog to be butchered. Unfortunately, it’s widely believed that dog meat tastes better if the animal is angry when killed, so the animals are prodded and poked with sticks before death. You don’t have to be a vegan to feel bad about torturing animals, so avoid dog meat while in Korea.

Bulgogi is beef marinated in a sweet sauce, usually with onions and carrots. Bulgogi is becoming more popular in other countries, but you should still try it in the native land.

Many Western restaurants have tried to incorporate bulgogi into other dishes. You can find bulgogi burgers, bulgogi calzones, and even bulgogi burritos. (Yes, Taco Bell in Korea sells a bulgogi burrito.) These fusion foods sound delicious, but they aren’t. At best you’ll be disappointed, and at worst you’ll spend the evening in regret and mild stomach discomfort. Stay away.

The word ‘pajeon’ (sounds like “pa-john”) means ‘pancake’ in Korean, but it’s not a breakfast food. Pajeon are normally eaten as a side-dish at dinner or while drinking. ’Haemul pajeon,’ or seafood pancake, is especially popular, and is often eaten while drinking makkeoli, a traditional Korean alcohol that looks like milk.

The word ‘jjigae’ means stew, and Korea has lots of great stews to choose from. Budae jjigae is not one of them. Also known as “spam stew” or “army base stew,” this oily dish is made from canned meat and hot dogs. During the early days of the Korean War, most Korean citizens had little to eat. American forces had a surplus of canned meat and hot dogs, so the starving Koreans added water and made a stew. Today Korea is much better off, and nobody is starving, so why people still eat budae jjigae is a mystery.

Few things are as popular in Korea as soju. Once made from rice, today’s chemically-derived version is dangerously cheap—a 400ml bottle can be purchased for about a dollar at any convenience store. And with an alcohol content of 15-20%, it’s potent enough to get you tipsy in just a few swigs. It smells like rubbing alcohol, it tastes like rubbing alcohol, and you’ll probably wake up the next day feeling like you drank rubbing alcohol. But believe it or not, many foreigners actually enjoy the taste. Grab a bottle and head to the noraebang (karaoke room) with a few friends for a good time!

A samgyeopsal restaurant is heaven on earth. Each table has a built-in charcoal grill and is equipped with a ventilation pipe hanging from the ceiling. Diners are given a pair of tongs and a few large pieces of unseasoned fatty pork. Once cooked, the pork is cut into pieces with scissors, dipped in a spicy pepper paste, and wrapped in lettuce or perilla leaves (sometimes called sesame leaves). Usually one person is designated as the griller, so make sure that person’s soju cup is always full!