There’s nothing like a relaxing spa vacation, especially when you take it in an equally relaxing spot. Madison, WI is a perfect destination because it’s like being surrounded by nature, while still indulging in a little luxury. Well-known for its soothing atmosphere and excellent getaways, it offers travelers in need of relaxation a wealth of both day spas and hotel spas, so planning a trip is simplicity itself.

There’s never a bad time for a spa getaway because stress doesn’t pay attention to the climate or the season. It’s as easy to crave relaxation in summertime as it is in the winter. Because of that, health and wellness enthusiasts visiting Madison do not have to base vacations around any particular season—and that can save money, in turn.

Wisconsin is a very outdoorsy state in general, and Madison is no different. Because visitors flock there in summer, it’s sometimes best to book a spa trip in the off-season. Hotels are available and less expensive, and the spas themselves are likely to have plenty of open spots. Typically, Madison sees a lot of guests between June and October, and again between December and February. Those are both excellent times to visit, but it’s worthwhile to consider a trip in March, April, May, or November to save money.

Look for a Spa in Your Hotel 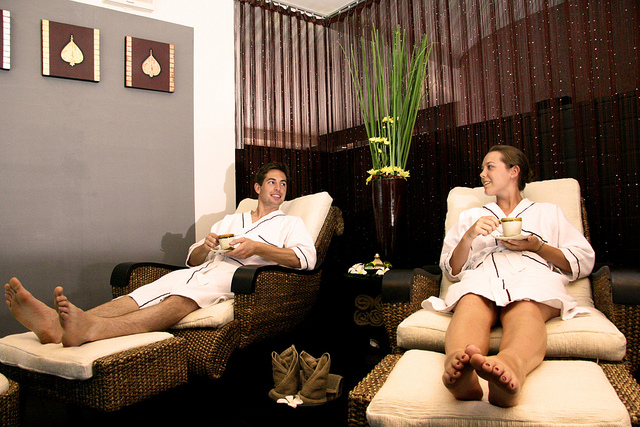 When shopping around for hotel deals, it’s always a win to find something that offers everything. Finding a hotel with a restaurant, a pool, and a fitness center all under one roof is incredibly convenient. Imagine, then, discovering a hotel that has its own spa as well.

Madison has a wealth of hotels with their own spas. Many of them also offer spa packages, which can cut down on costs. For example, the Crowne Plaza Hotel provides a package at Indulge Spa, allowing visitors to pick which treatments they’d like. This is a solid choice for spa lovers interested in some extra luxury. The Best Western West Towne Suites, however, offer something off the beaten path, namely a free YMCA pass and amazing health services. The Magnuson Grand Hotel Madison is another sure choice, with both spa tubs and a health center.

Book a Spot with Nearby Day Spas

Fortunately there are also lots of spa hotels in Madison. The best bet here is to look for a hotel close to the most popular spots. Mineral Point Road is understandably a good locale, with several Ayurvedic spas. Odana Road has its fair share of day spas as well, along with University Avenue and Atwood Avenue.

It’s always important to consider the budget, however. Check into prices before booking, at both day spas and hotel spas. At hotels, see how much each spa offers, what’s covered, and if there are discounts for guests who go over their allotted amounts.

Rest and relaxation are hard to come by, so it’s important to make the most out of any getaway. What do you think a spa needs to have to earn a high rating?