Canada is known for many things, including its natural beauty, great skiing and boarding, bustling cities, top festivals, friendly people and much more. However, something that isn’t talked about enough is its cuisine. Head to this North American nation and you’ll find all sorts of interesting snacks and drinks to try. Read on for a sample you have to test next time you’re in Canada.

Obviously, one of the most iconic Canadian tastes you have to have try next time you’re in Canada is maple syrup. Around the country you’ll find all manner of maple syrup–flavored items to enjoy (such as doughnuts, toffees, and other candies), as well as the fresh stuff, all ready to pour over pancakes, waffles, French toast and more.

There’s a reason why the phrase “as Canadian as maple syrup” is in the vernacular; you’ll find the sweet syrup everywhere. Canada produces approximately 80 percent of the world’s stores and is the largest exporter by far.

Another Canadian creation you have to try is the “Nanaimo bar.” This slice, while now eaten all over the globe, originated in Canada and was named after the city of Nanaimo in the province of British Columbia.

The dessert is a no-bake, layered food made in a bar shape and sliced into pieces. It is typically whipped up using a graham-cracker crumb base (sometimes with coconut and/or walnuts added in), a middle layer made from a vanilla-custard concoction and a topping such as chocolate ganache or icing. Nanaimo bars are put in the fridge to set and then eaten cold. There are numerous variations available of the slice too, such as mint chocolate or peanut butter versions. 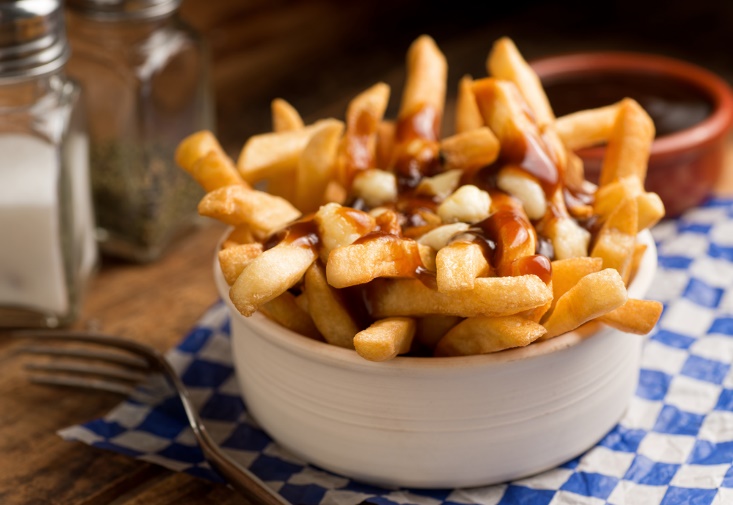 While beavertails may sound rather unappetizing, particularly to animal-lovers, don’t avoid this cuisine just because of the name. This classic Canadian sweet treat (yes, another one!) is actually a pastry.

Beavertails are made from balls of dough molded into the shape of a beaver’s tail and then fried. The dough is topped with whatever people like best, such as fruit, chocolate or candy bits.

Next, if you’re still not counting calories after all the sugary goodness mentioned above, it’s time for a more savory dish for your menu. In America, the good old French fry has been a staple for forever, but in Canada, you’ll find that fried potatoes are eaten a slightly different way.

Poutine is the name of fries that are amped up with layers of gravy plus chewy cheese curds. There is a lot of texture and flavor to this dish, and often it is further enhanced with ingredients such as black truffles or foie gras. It can also have bacon and other meats added to it.

When you think about Canadian cuisines, it’s unlikely that a bread will come to mind. However, in Canada you must try out the delicacy called “bannock.” This is found in many bakeries and restaurants, as well as cooked up by campers over an open fire. It takes its name from a traditional Scottish flat bread.

Bannock is a versatile griddled bread which is regularly used as a replacement for normal loaves of bread. For instance, gourmet sandwiches can be made with bannock as the base rather than focaccia or Turkish bread; or the bread can be used for putting together burgers or enjoying hot dogs. Sometimes bannock is also eaten as a sweet menu item with added toppings such as sugar or icing popped on top or inside.

Now, while there are plenty of amazing foods to try in Canada, don’t forget about drinks. In particular, no trip to Canada is complete without trying the country’s famous Icewine. If you’re planning a trip to Niagara Falls to see the natural phenomenon that draws millions of tourists each year, add an extra night or two’s stay at a Niagara Falls hotel, so you can make your way to Inniskillin Winery.

Located in the pretty suburb of Niagara-on-the-Lake, this popular vineyard is one of the places where visitors can try the special dessert wine known as Icewine. It is made from grapes which are frozen on the vine, and the drop is renowned around the world for its intense, beautifully-sweet flavor.